There are mysteries in the woods of the Hudson Valley of New York and northern New Jersey. There are stone sites that are assumed to be the work of colonial farmers, but author and researcher Linda Zimmermann has found compelling evidence that disputes this misconception. Zimmermann explores stone chambers, perched boulders, standing stones, and massive walls that may just be unique historical treasures that must be studied and preserved. Could they be the work of Native Americans or Pre-Columbian voyagers?

Our continent’s megalithic sites have been featured in the pages of Ancient American for more than twenty years. But Mysterious Stone Sites is the first a book of its kind to concentrate on the rich field of dolmen’s, chambers,cairns, balanced rocks, pillars, walls, drilled holes, arranged circles,inscriptions, maps, astronomical alignments, and monoliths in the Hudson Valley and New Jersey.

That’s a lot to fit between the 177 pages of Mysterious Stone Sites, but author Linda Zimmermann has done a splendid job of it, not short-changing readers with insufficient information, but, on the contrary, providing them with succinct descriptions and credible assessments that cut to the chase. Her clear brevity is illustrated by 155 photographs and line drawings of megalithic places that prove, by their sheer numbers, that our Eastern Seaboard became home for Neolithic seafarers from Western Europe during Neolithic times.

What makes Zimmermann’s new book especially intriguing to investigators already acquainted with the subject are the many otherwise unknown locations she describes with precision and insight. For other readers unfamiliar with the profusion of very ancient monuments populating North America, Mysterious Stone Sites serves as an engaging introduction to these impressive structures.

Linda Zimmermann is a research chemist turned award-winning author of 30 books on science, history, the paranormal, and fiction. Her Ghost Investigator series of books led to comic books based on her cases. Her novel HVZA: Hudson Valley Zombie Apocalypse was turned into a graphic novel. She recently starred in an award-winning documentary, In the Night Sky, based on her research into UFO sightings in the Hudson Valley.
Buy Link
Amazon
Barnes&Noble
by chellecordero
The newest members of the Dark Horse Comics family are
here to turn the zombie genre on its (severed) head with… 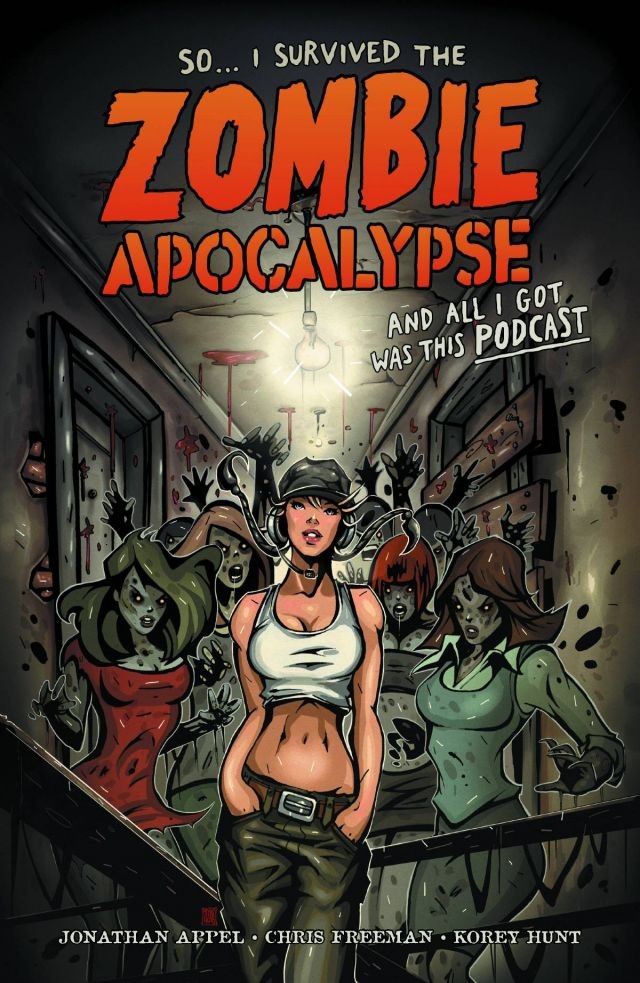 (LOS ANGELES — NOV 6, 2013) This November 20th, the legendary Dark Horse Comics will proudly release its genre-bending new graphic novel, So… I Survived the Zombie Apocalypse and All I Got Was This Podcast. And yep, this ain’t your father’s apocalypse: mostly because the planet’s males may have been completely wiped out. Fortunately, women continue to thrive and survive — albeit as bloodthirsty zombies!

So… I Survived the Zombie Apocalypse was conceived and developed by Korey Hunt, screenwriter Chris Freeman, and writer/director Jonathan Appel. Following Appel’s untimely death in 2010 at the age of 35, Hunt and Freeman teamed up with film producer friend Sarah Quay. Their goal: do everything possible to ensure Jonathan’s vision might somehow see the light of day. Three years — and countless struggles — later, they’ve finally succeeded.

Mara Mitchell is humanity’s lone, non-infected female in this edgy and comedic dystopian tale. She’s young, idealistic, and beautifully geeky, with one heck of a podcast. And she’s hell-bent on befriending her neighbors. One problem, though: the planet’s zombie women turn out to be stone cold catty! We’re talking some serious undead ‘tude! Can Mara charm her way into their cliquey decrepit girls club? Or will the unending rejection push our hero to the brink of an all-out war?

With its unique ‘females only’ slant, So… I Survived the Zombie Apocalypse deliberately runs counter to what we’ve come to expect from the genre — a conceit Korey Hunt credits to the fertile mind of his late friend and writing partner. “Working with Jonathan was like trying to fill a bucket from a fire hose,” says Hunt. “He would barrage you with ideas and you would just try to catch some of them, adding in your own when you had a minute to think.”

As for future plans, Sarah Quay hopes a successful run will allow the creative team to “keep telling stories in this bizarre, clique-ish dystopia where the human male is endangered and Mara Mitchell may be his only hope.” In the meantime, the group — collectively known as Slumber Vision — has already begun collaborating on a second book for Dark Horse Comics, titled, Twinsburg. Co-creator Chris Freeman describes it as “A murder mystery that takes place at a twins convention — with plenty of dark twists and turns, naturally.”

So… I Survived the Zombie Apocalypse and All I Got Was This Podcast
Featuring animation by veteran illustrators Rich Bonk, Alan Kupperberg,
Jerry Beck, and Melike Acar
Available in all major North American comic stores on Nov 20, 2013
Also available for download internationally at www.digital.darkhorse.com