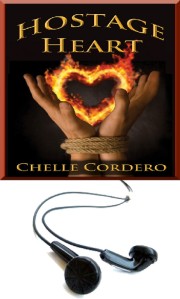 an excerpt from Hostage Heart:

“Everybody get down! And keep your faces to the floor.”

All of the bank’s customers obeyed immediately. When Deanna raised her head to watch what was happening, the man who had been standing in front of her gently pushed her back down.

“Do as they say,” he cautiously whispered to her from his own position on the floor.

She could see the feet of the frightened tellers as they were ushered toward the front of the counter to join the rest of the customers. One poor young man was stopped and dragged back behind the counter to empty the cash drawers into a sack. Deanna heard muffled sobbing around her.

One of the masked robbers was moving through the mass of people on the floor demanding wallets, purses and jewelry. Perhaps foolishly, Deanna decided she wasn’t going to give up the store money without some kind of protest. She also slid her grandmother’s birthstone ruby ring off of her hand and slipped it down her bra front for protection.

“No.” He grabbed for it and she wouldn’t let it go.

“Damn it, it’s not worth dying for.” The man spoke to her again in a harsh whisper. She saw that he was eagerly handing over his own wallet.

The purse was wrested from her hand. “No. Give it back!”

He heard the gentle twang in her voice and was intrigued by it. “Don’t be an idiot!” he grumbled under his breath.

Deanna raised her head and her voice in anger. “Will you just be quiet! Ow!” She felt her head being yanked backwards by the hair and she found herself staring at the stocking face of one of the robbers.

“Stand up!” She was forced to her feet. “You want to fight?” A gun was pressed against her ribcage. “I’ll give you something to fight about.” He started to push her towards one of the office doors.

“Where are you taking me?” Sudden terror seized her. She tried to break away but found his grip on her was too strong. “Please. I’m sorry…” Her imagination ran wild with horrible possibilities. Tears began to sting her cheeks.

“Well gee, I got me Scarlett O’Hara, boys.” The bank robber laughed as he announced his find to his cohorts.

“Let her go.” The man from the front of the line made a meek plea for her safety.

Deanna continued to struggle and finally broke free. The robber lunged for her. Faster than she was aware, the suited customer was standing and pushed her protectively behind him. He blocked the robber and they scuffled. She stepped backward and was terrified to see the robber gain the advantage and hold the gun to the man’s temple. One arm wound its way around the would-be rescuer’s neck and he was quickly subdued.

No one else wanted to take a risk. Everyone obeyed the robbers’ demands. The young teller finished filling the bag, customer pockets were emptied of valuables. The gun was still being held on the attractive stranger.

She was shaking with fear and with guilt. “Please let him go.”

She hesitated briefly and then did as she was told.

“Now everyone just remain where you are. Count slowly to three-hundred. If I hear any police sirens or see any cop cars, I will kill this man.” The robbers began to back out of the bank with one of them dragging the struggling man with him.

Deanna couldn’t let them just take the man with them, not after he had risked himself to save her. She looked up and saw a large ceramic demonstration piggy bank on the counter; as soon as she saw the robber look away, she jumped to her feet and grabbed it. She ran after the robber holding the hostage and struck him in the back of the head.

The robber stumbled. “Run!” She screamed at the stranger. He stared at her in disbelief. “Run!” Finally he made a hasty retreat to the street.

Before Deanna could get safely back into the bank, she found herself being grabbed again and this time the gun was held to her head.

“You little bitch.” The robber’s voice was raspy. “You’re coming with us instead, then.” He dragged her pleading out the doors and threw her into a van just outside on the street.

Another one of the assailants grabbed her to tie and gag her as the vehicle made a hasty retreat. About a block later, the van made a quick stop and Deanna was surprised to see the suited customer step into the van.

He looked at her in anger. “You couldn’t leave well enough alone, could you?”