This time, it’s murder but there’s no body and no motive. In fact, there’s no evidence of any foul play except for the word of a nosy busy-body with night-vision binoculars.

Despite big bucks, I suggest we pass on this case but Sam’s family butts in and of course, it explodes in our face. Now, we’re hip deep in a whole lot of shit better left to the police.

The good news? No more Joey. We moved into the loft above our new office space.
The bad news? They’re demolishing the place next door and the jackhammer’s sent our kitten into therapy.

Did I mention I had to gut the bathroom and we have no shower?

Join Suds and Sam in another hilarious, kick-ass adventure. Warning, can become addicting.  Happily ever after guaranteed.

Suds and Sam For Hire

I made her promise.
Absolutely, positively,
no field work while I’m out of town.

When I find my forged signature and a rental car, I’m ready to wring her pretty, little, neck, except I can’t find her. How the hell did she get lost in a snow storm in Vermont?

Sam and Suds are at it again in this action-filled hilarious new adventure.

Join her newsletter at: readerlinks.com/l/738112
Also, you can find me here: facebook.com/stellaMarieAlden/She’s a born and bred Vermonter, musician, writer, programmer, and a do-it-yourself-er kind of woman who loves yoga, Zumba, jazz, her two cats, and of course, a good party!
by chellecordero

The Angel of Soriano:
A Renaissance Romance 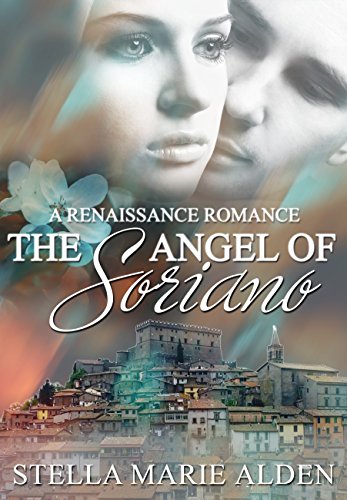 Tonight, Aurelia’s uncle plans to steal Soriano away from Rodrigo Borgia. Although she doesn’t give a fig who owns the town that nearly stoned her to death, her handsome captain is behind bars. She should never have agreed to marry him, especially not upside down and over his shoulder.

What is it about Bernardo’s new wife? The beautiful angel refuses to trust him, not even after he weds her without a dowry. She wields a firearm like a pirate, disguises herself as a male doctor, and nearly drives him mad. And yet he can’t go on without her.

How can a mere man convince a woman like that to come home?

About the Author
“Just like every little kid, I pretended. The only difference with me? I never stopped.” Stella says about herself. “One of most fun I had with my girls when they were little, was making their stuffed animals come to life. Even now, two of the favorite bears sit on shelves, waiting for the twenty-four-year-old to come home for a visit. Don’t be sad. They have the cats to talk to and I chat with them, occasionally. I think, as they grow older, they mostly sleep in a Peter Pan heaven.”
Stella Marie Alden has been a mother, wife, writer, librarian, electronics engineer, software architect, home repairman, psychiatrist, chief tear-dryer, career counselorand she loves to write. She jumps out of bed at 5:30 AM everyday, eager to go and ready to give her lovely couples a happily-ever-after. Nothing good comes easy, so they must struggle. Life is like that.
She says she enjoys working out almost everyday. Her favorites are zumba, yoga, and running along a warm sandy beach in bare feet.
Buy now
Amazon Kindle
by chellecordero

Terra’s survival depends on avoiding other witches. That includes hot sexy flame-throwing males. When her world shifts beneath her, literally, she’s forced into the arms of a man who ignites a lust that could destroy them both. She’s kept her distance, but every time she turns, he’s there. And now her enemies know where she is and they’ll stop at nothing to reclaim her and the potent dark power she hides.

Tormented by one fatal night, Jace Fialko wants nothing to do with finding a mate. He’s trouble for anyone, especially the stubborn, sinfully tempting little witch harboring dangerous secrets of her own.

Dark Tremor is a stand-alone novel, and can be enjoyed even if you haven’t read other books in the series.

“An adrenaline and action-packed tale.  The story starts out at a breakneck pace and keeps that level of insanity until the end.  Fabulous!  You cannot help but fall for these characters – a strong and independent female; a rebellious and carefree male – as they are both broken and have such similar haunts in their past.  One genuinely yearns for them to be together and to heal each other’s pain.  The displays of the “earth” magic were stunning and spectacular and the solstice-mating antagonism between the characters was exhilaratingly beautiful, humorous, and heart-wrenching.  And when the fireworks ignite…just…WOW!” Lori Wiest, Wee Bit O’ Whiskey Blog

Growing up in Vermont, she loved to make up stories. Crayons fought each other over size and placement in their cardboard box and imaginary friends crowded the house. Her brother often complained. “Tell her no one’s here, Mother.”.

Her career paths have varied. She’s been a librarian, a classical clarinetist, recording studio engineer, broadcast electronics repairman, and now she architects software programs. She lives in Bergen County, NJ with her life-long hero and their two cats. Her two girls are grown but ever supportive. You go Mom!

Chantel Seabrook is the author of the Amazon bestselling fantasy romance Cara’s Twelve, as well as the Therian Agents paranormal romance series, and co-author of the Mated by Magic series.

When she isn’t reading or writing sexy stories, she’s most likely spending time with her family, cooking, singing, or racing between soccer, hockey and karate practices. She’s living her own happily ever after with her husband of fifteen years and their two daughters.

She loves creating new exciting characters – from sexy, bad boy alphas, to the passionate, fiery women who love them.

Canadian born and bred, she started life in Edmonton, Alberta, and now resides in London, Ontario. She attended Western University where she graduated with an Honors degree in Anthropology.

Her guilty pleasures include red wine, pasta, binge watching Starz originals, and hanging out with her rescue pup, Jaxx.

She loves to hear from her readers and can be reached at chantelseabrook@gmail.com