Nine members of the unit deployed to New York in early April, in response to calls for help from hospital staffs overwhelmed by the coronavirus. According to the city government’s website, New York endured more than 200,000 confirmed cases from February until the end of May.

Air Force Staff Sgt. Trevor Talbert, a technician with the 307th Medical Squadron, said the situation was dire when the airmen arrived.

”The civilian staff at my hospital was burned out and depleted,” he said. ”There were at least 40 patients on my floor, and the numbers didn’t start to go down until last week.” He explained those numbers included a broad age demographic, with patients ranging in age from 20-somethings to octogenarians. ”COVID-19 does not discriminate,” he said. ”They all struggled.”

The airmen’s efforts helped save lives, but they had to learn to deal with losing patients as well. Talbert spoke about leaving the bedsides of patients at the end of a shift and returning the next day to find out they had died. ”It makes you appreciate the important things in life,” Talbert said. ”It never became normal, and I’m glad because I didn’t want to become lax about treating them.”

Air Force Capt. Aaron Biggio, a nurse with the 307th Medical Squadron, said hospital staff, patients and even the public showed deep appreciation for their efforts. He said people in the neighborhood would lean out of apartment windows, cheering for them during shift changes. ”I’d get thanked in the streets by total strangers, often with tears in their eyes,” he said. ”There is no one in New York who doesn’t know someone else affected by the disease.”

Talbert said the airmen did their best to serve the patients beyond standard medical care. He recalled using his cellphone to set up video chats between patients and loved  ones. ”We were the only family they had while they were under our care,” he explained.

Most airmen deployed to the region with a focus on direct patient care, but a handful also took part in research efforts designed to learn how to mitigate the effects of COVID-19 on hospital workers.

Air Force Tech. Sgt. Cynitra Roberson, the squadron’s immunization noncommissioned officer in charge, took part in patient care, but also served as part of a research team trying to determine if the safety protocols put in place were effective. She and other team members tested almost 500 medical workers. Though the research results remain to be determined, Roberson said, she gained personal insight from the experience.

”It was really neat and something different,” Roberson explained. ”I worked with really good people, and it was a great experience.”

Throughout the deployment, the airmen worked 12-hour shifts and, in some hospitals, faced patient loads well beyond normal capacity. Biggio said he would do it all again, regardless of the hardships involved.

”I’d get back on the plane right now if they would let me,” he said. ”There’s just something beautiful about the humanity of people coming together to fight through something so gruesome.”

Returning airmen are scheduled to be in quarantine for two weeks before being allowed to return to their military and civilian duties. 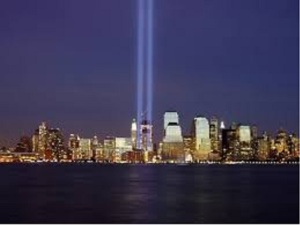 In July 2014 the News York Post reported that more than 2500
first responders [police, fire and EMS] had developed Cancer and respiratory
illnesses from the exposure to Ground Zero dust – Many have died.

The air at Ground Zero contained pulverized concrete, shards of glass and carcinogens, according to a 2011 Centers for Disease Control and Prevention report.