What Can Animals Teach Us
About Kindness And Empathy?
Studies Of Our Non-Human Friends May Show
How Genes Inspire Our Better Tendencies 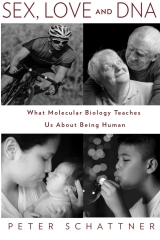 While humans are capable of acts of cruelty, greed and deception, they also possess plenty of positive characteristics such as kindness, compassion, friendliness and empathy.

But why? Are those better angels of our nature something nurtured in us by our parents, or do we arrive on the planet genetically predisposed for them?

It’s something scientists have puzzled over, and many of them may be finding answers not with human research but by concentrating on animals.

“The idea that we could learn about kindness or compassion by studying animals might seem strange,” says Peter Schattner, a scientist and author of the book “Sex, Love and DNA: What Molecular Biology Teaches Us About Being Human” (www.peterschattner.com).

“But since similar genes are often found in animals and people, what we learn from animals may well be relevant to understanding human behavior as well.”
Dogs are especially good species to study to learn about kindness, devotion and other pro-social traits because they have been genetically bred to display those traits, Schattner says.

“Look at it this way,” he says. “Dogs are the result of an extended genetic ‘experiment’ carried out by humans to artificially select the very personality traits that we value in them.”

Another reason geneticists like to study dogs is that, as species go, they are relatively young.

“Most scientists estimate people began breeding wolves for gentleness and tameness 15,000 to 30,000 years ago,” Schattner says. “Compare that to humans. We are believed to have diverged from chimpanzees, our closest living evolutionary relatives, about 4 million to 9 million years ago.”

The time span is important because fewer DNA changes between dogs and wolves have had time to develop. That makes it easier – though not necessarily simple – to track genetic changes to determine what genes affect behaviors, Schattner says.

Dogs aren’t the only animals scientists study that could help unlock clues about human traits and their genetic origins, Schattner says. Other examples include:

•  Mice and friendliness. Scientists studying the biological origins of Williams Beuren syndrome are making progress with mice. The syndrome is a medical condition that has several traits, but one of the most striking is that people with this syndrome are unusually friendly, even toward strangers. Scientists can engineer mice to have a similar chromosomal makeup as people with Williams Beuren syndrome. One result of this research so far is that, at least in mice, the friendliness associated with the syndrome appears to be linked to a single gene.

•  Siberian silver foxes, gentleness and friendliness. Research on Siberian silver foxes began in what was then the Soviet Union in the 1950s in an area where local farmers raised the foxes for their fur. A Soviet geneticist began trying to breed a tamer fox that was easier for the farmers to handle. He did this by mating the tamest males with the tamest females. Within four generations – and a silver fox generation is only about three to four years – the animals were showing signs of domestication. Over time, the researchers showed that gentleness and friendliness were genetic. “One result of all this is the foxes became so tame and adorable that allowing them to be killed for fur became difficult for the scientists,” Schattner says. “They began selling them as pets.”

•  Rats and empathy. Perhaps one of the more surprising experiments involved rats. University of Chicago researchers placed two rats in a large cage. One rat was free to wander, but the other was trapped in a smaller cage within the cage. The trapped rat would cry out in alarm and, remarkably, the free rat would try to open the other rat’s cage, which was no easy task. Even with no reward, three-fourths of the free rats in the experiment chose to open the trapped rat’s cage. “The results of these experiments were disturbing to people who believe that only we humans are capable of empathy and compassion,” Schattner says. Some scientists were still skeptical, saying the rats’ may have been pro-social, but didn’t necessarily demonstrate empathy or compassion.

Peter Schattner (www.peterschattner.com) is a scientist, educator and writer with 30 years of research experience in molecular biology, genetics, biomedical instrumentation and physics. He is a recipient of the Technical Innovation Award from the American Institute of Ultrasound in Medicine. Schattner received his doctorate degree from the Massachusetts Institute of Technology under Nobel Laureate Steven Weinberg and has held research and teaching positions at the University of California, California State University and Stanford Research Institute. He is the author of numerous scientific articles and reviews, as well as the textbook “Genomes, Browsers and Databases.” His latest book, “Sex, Love and DNA: What Molecular Biology Teaches Us About Being Human,” is his first book for non-scientists.