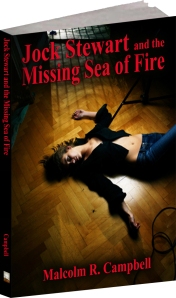 Mainstream humor with a dash of mystery… A throwback to Hollywood’s film noir reporters, Jock Stewart is out of touch with the looming world of digital journalism.

While he goes out of his way to mock those in authority by pretending to kowtow to them, he admits he does his best work by “being an asshole. A mix of Don Rickles and Don Quixote, Stewart is the man for the job when the skirts are up and the chips are down…

Hard-boiled reporter Jock Stewart wakes up on the morning after the Star-Gazer office party with a hangover and an old flame in his bed and he cuddles up with the mayor’s wife in the back seat of a 1953 Desoto. Between these defining moments, he investigates the theft of the mayor’s race horse Sea of Fire and the murder of his publisher’s girl friend, Bambi Hill.

Stewart discovers the truth for his news stories via an interview style based on lies, pretense and audacious behavior…

Small town hi-jinks delivered with healthy doses of sarcasm and wit.  Jock Stewart is like Guy Noir freed from the confines of public radio.  A must-read for anyone who likes their sleuths hard-boiled, their women salty, and their plots with as many twists and turns as a plate of the Purple Platter Diner’s spaghetti. ~ Nancy Whitney-Reiter

AUDIO, PRINT, and ALL ELECTRONIC EDITIONS

And if you decide to use the Amazon-exclusive Audible.com 30-day free trial membership it includes:

Jock Stewart and the Missing Sea of Fire is narrated and produced by R. Scott Adams.

SMASHWORDS FOR ALL EREADERS
for Sony, Nook, Kindle, Apple, Kobo and More

Jock Stewart and the Missing Sea of Fire Video