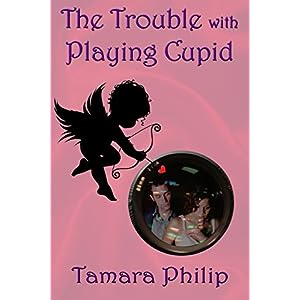 The Trouble With Playing Cupid by Tamara Philip

Tamara Philip’s debut novel was filled with a lot of humor and fun. I was amused by the misunderstandings and the characters were endearingly real. Ms. Philip’s descriptions of the settings were believably real and made it easy to feel as if the reader was watching the story unfold right in front of us. I look forward to more books from Tamara Philip.
(reviewed by Chelle Cordero)

One New Year’s Eve, shy singer, December Brown drunkenly texts her talk show host pal, Trace Randall, about her long time crush on the aloof actor, Tom Elmswood. Thinking the two celebrities would make a cute couple, he unwisely decides to play matchmaker… in front of a live studio audience.
Things start to go downhill when Tom admits he’s never even heard of December before. Now what seemed like a sure fire hit quickly becomes a flop. Will these two lonely hearts ever make a love connection or has this cupid’s arrow missed its mark?

From the Back Cover

How to alienate your secret crush in less than 10 minutes: The December Brown story…
Or at least that’s the way it starts when the pop singer’s meddlesome talk show host friend tries to play cupid on live TV. The object of her affection, handsome actor Tom Elmswood didn’t know what to expect when they met, but is there still a chance at romance for these two lonely celebrities?