A Pennsylvania community is mourning the loss of a flight paramedic who died December 7, shortly after his retirement from a 45-year EMS career.

Lehigh Valley Health Network MedEvac Flight Paramedic Don Shambo, 63, retired in November after 30 years with MedEvac and nearly a half-century of service as a first responder.

Shambo had been diagnosed with cancer prior to his retirement and died after “a short battle with illness” and weeks in intensive care, said MedEvac Director Bryan Evans.

A statement from Suburban EMS reads, “Don has been a pillar of the both MedEvac and the entire EMS Community in the Lehigh Valley for decades. Don started his career in EMS as a teenager 45 years ago when he joined the Whitehall Fire Department, then becoming an EMT at the Whitehall Emergency Squad. Don became a paramedic in 1980 and actively served many communities across the Lehigh Valley. Don worked for LVHN MedEvac for over 30 years as a Flight Paramedic retiring last month. Don is a past president of the Lehigh County Ambulance Association.” 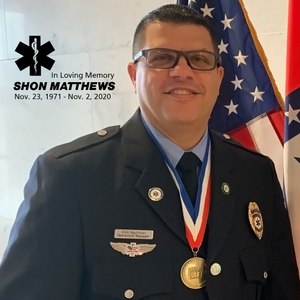 Paramedic Shon Matthews worked in LifeNet’s Texarkana Division since October of 2007. Prior to LifeNet, Shon spent nearly two decades working at Alumax Mill Products, as both union president and a finishing operator before a family accident inspired Shon to change career paths.

Within a few months of the accident, Shon joined the Booker Bridge Volunteer Fire Department in Miller County, Arkansas, as a first responder. After meeting a paramedic who encouraged him to go into EMS, Shon decided to start EMT school and began working for LifeNet EMS part-time in 2007 as an EMT while continuing his education to become a paramedic.

In March of 2009, Shon joined LifeNet full-time, and a few years later, he was promoted to a field training officer role. He quickly proved himself as an asset in that position, and in May of 2013, when one of the company’s Operations Managers (OMs) was deployed overseas, Shon was selected to temporarily fill that role for nine months.

When it was time for Shon to return to his role working as a ground paramedic, the LifeNet Air medical helicopter in Texarkana had a position open. Shon was asked to fill-in as a flight medic.

In June of 2016, Shon was offered a full-time role as a flight medic on LifeNet Air. It was a job he had dreamed about having since starting in EMS. Less than a year later, a full-time opening came up for an Operations Manager (OM) role. He was nominated for the  Star of Life award in 2019. Outside of EMS, Shon was a devoted family man. He adored his wife, Jennifer, and their children, Nicole and Derek.

Rockland County NY lost two devoted members of their EMS community early Monday morning, September 21, 2020. While traveling home from a Rosh Hashanah (Jewish New Year) celebration they were in a tragic and fatal auto accident on the NYS Thruway near Suffern.

Faist Ambulance Corps announced the passing of these two volunteers: “1st Lt. Moshe Herzog and EMT David Schneebalg have answered their last call. They were dedicated members of the EMS community and served with honor and dignity. They will be missed. Rest in peace we will take it from here.”

“The tragic loss of 27-year-old Moshe Herzog and 26-year-old David Schneebalg is heartbreaking,” said Congresswoman Nita Lowey. “Not only were they young, outstanding examples of what it means to serve one’s community and to devote oneself to others, but they were described by friends and coworkers as giving, loving, and caring people whose lives were tragically cut short.”

Senator David Carlucci called this tragedy, “A terrible loss for our community. Moshe Herzog and David Schneebalg were two young men taken far too soon. They selflessly served Rockland, responding to dangerous situations to save lives. My heartfelt condolences go out to their families, friends and the entire EMS community.“

Rockland County Executive Ed Day ordered all flags in the county to be lowered to half-staff in honor of the 2 volunteers. Both men were members of multiple ambulance corps. Between them they belonged to William Paul Faist Volunteer Ambulance Corps, Haverstraw Ambulance Corps, Inc., and Chaverim of Rockland.

the following was shown during the Memorial Service for Moishe Herzog…

“Never thought I would find myself in an environment like this, but since I’ve become a part of this organization, I’m proud of what we sacrifice to accomplish the tasks we are given,” said Chimbo.

Since the ship’s Yokosuka departure in June 2020, the Ronald Reagan continues to operate in the Indo-Pacific alongside allies and partners to demonstrate the United States of America’s commitment to defense agreements, as well as provide security and stability in support of a free and open Indo-Pacific region.

In early July 2020, USS Nimitz (CVN 68) and USS Ronald Reagan Carrier Strike Groups started conducting dual carrier operations in the Philippine Sea and South China Sea. These carrier strike groups incorporate the capabilities of embarked fixed and rotary wing aircraft, Aegis guided-missile cruisers and destroyers, and attack submarines. This opportunity for two carrier strike groups to train and operate together in the region provides combatant commanders with significant operational flexibility and capabilities that only the U.S. Navy can bring.

Women line a hallway at the Salvation Army as a computer tablet rests on a stand atop a pole near the check-in desk.
The equipment resembles a skeletal robot, but the human face of nurse Bre Loughlin appears on the screen. It’s 4 p.m., time to screen 40 or so women for COVID-19 before they sign in for the night at the homeless shelter on East Washington Avenue in Madison, Wisconsin.
Loughlin is CEO of Nurse Disrupted, a company she started in April with president Tracy Zvenyach. They and other nurses have been providing online COVID-19 screening at Porchlight’s homeless shelter for men since late March and at the Salvation Army women’s shelter since May.

Long-term, they see potential for their virtual nursing service at public schools, which have seen a reduction in staff nurses, and in prisons, where they could help manage the chronic diseases and mental health of inmates.
With Wisconsin forecast to have a shortage of nearly 12,000 nurses by 2030, Nurse Disrupted could also extend the reach of the workforce while helping train student nurses to increase supply, Zvenyach said.
read more…
by chellecordero

Hospitalman Tito Mann, Jr., a native of Newburgh, New York, is learning skills that will be vital in the ongoing fight against a worldwide pandemic.

“The Coronavirus Disease 2019 (COVID-19) Pandemic brought an invisible enemy to our shores and changed the way we operate as a Navy,” said Adm. Mike Gilday, Chief of Naval Operations. “The fight against this virus is a tough one, but our sailors are tougher. We must harden our Navy by continuing to focus on the health and safety of our forces and our families. The health and safety of our sailors and their families is, and must continue to be, our number one priority.”

Mann is preparing to protect sailors and their families by learning the latest in health care and training at the Medical Education and Training Campus (METC), a state-of-the-art DoD healthcare education campus that trains military medics, corpsmen and technicians.

“We are learning the preventative measures to take while also how to better educate others on how to react in the current situation,” Mann said. “We also learn the care and treatment for those who are sick, wounded or injured.”

Mann is a 2015 Douglas Byrd High School graduate. According to Mann, the values required to succeed in the Navy are similar to those found in Newburgh.

“I learned to always be on the lookout and pay attention to small details,” Mann said.

The U.S. Navy Hospital Corps is the most decorated career field in the Navy. Corpsmen have earned 22 Medals of Honor, 179 Navy Crosses, 959 Silver Stars and more than 1,600 Bronze Stars. 20 ships have been named in honor of corpsmen.

The advanced interpretive historian qualification means that a sailor has studied and trained beyond the basic history of USS Constitution and has learned about all aspects of the ship’s unique design, ship life during the age of sail and the ship’s major historic battles.

“Being able to expand my knowledge has been challenging but very rewarding,” said Kelly.Kelly, a 2008 graduate of St. Mary High School, has served in the Navy for four months and USS Constitution is her first duty station.

Duty aboard USS Constitution is one of the Navy’s special programs, and all prospective crew members must meet a high standard of sustained excellence and interview to be selected for the assignment.

The active-duty Sailors stationed aboard USS Constitution normally provide free tours and offer public visitation to more than 600,000 people each year as they support the ship’s mission of promoting the Navy’s history, maritime heritage, and raising awareness of the importance of a sustained naval presence.

JACKSONVILLE, Fla. – Petty Officer 2nd Class Ralph Bellamour, a native of Newburgh, New York, with hometown ties to Haiti, is playing a critical role in the U.S. Navy’s efforts to maintain a healthy and ready fighting force in the face of the Coronavirus pandemic.

As a hospital corpsman working at Naval Hospital Jacksonville, Bellamour’s skills are vital to maintaining the health of the sailors in the Jacksonville area, and by extension, the readiness of the Navy’s operational ships and submarines on which they serve.

“The Coronavirus Disease 2019 (COVID-19) Pandemic brought an invisible enemy to our shores and changed the way we operate as a Navy,” said Adm. Mike Gilday, Chief of Naval Operations. “The fight against this virus is a tough one, but our sailors are tougher. We must harden our Navy by continuing to focus on the health and safety of our forces and our families. The health and safety of our sailors and their families is, and must continue to be, our number one priority.”

Having been in emergency medical services for more than 30 years — over 25 as a paramedic — I have worked through many public health emergencies but have never experienced anything like the COVID-19 pandemic before.

During a pandemic, besides providing emergency care to patients, it is also important that we try to identify potentially infectious patients before they arrive at the emergency rooms to limit exposure to non-infected patients and employees.

During this crisis, we’ve had to adjust practically all our standard operating procedures from dispatch to patient drop-off. Everything is different now. We are trying to provide the same high quality of care but are having to learn different ways to achieve this standard while limiting the spread of this invisible virus.

We are thankful for our communities that continue to support us through this challenging time. I and my fellow paramedics also have great admiration for the many courageous, professional EMTs — both career and volunteer — that we have the privilege of working with every day. They are our heroes!

My Tweets
A Potpourri of Promos, Book Talk, Entertainment & Articles of Interest from Chelle Cordero
Create a free website or blog at WordPress.com.
Loading Comments...