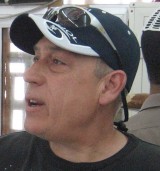 Paul Zunckel was born in 1957 in Zimbabwe, then known as Rhodesia. His family moved to South Africa in 1966, where he completed his schooling at Kingsway Senior High School in Amanzimtoti.

He did his two years National Service in the South African Defence Force as an Ops Medic, wanting to follow his heart and study medicine, but life got in the way.

Paul was employed in Air Traffic Control for twenty years, and has been involved in Management positions for over twenty-five years. He has a Human Resource Management Diploma, and is an accredited Facilitator.

He started to write full time in August 2014, about something that is close to his heart… Africa. The mysteries, the superstitions, and all the beauty and treachery of the land. He holds his wife responsible for the road he is now traveling, as she was the driving force behind him in his Debut novel, Blood Moon over Africa. Since then, the stories line up to be told.

Paul loves to write as it takes him into another world, and he enjoys the reaction that he receives from readers.

Apart from writing novels, he also plays the guitar and writes his own material, although he is unable to read music. Music forms a big part of his life, and he can lay claim to having cut one CD, although he does say, “I’m too old to be an idol.”

He has two children from a previous marriage, and has been married to Lucie, the love of his life, for the last fourteen years. Paul and his family live in the Eastern Cape, South Africa, along with man’s best friend, a cross Alsatian/Lab who answers to the name “Pooch” and is at his feet every time he sits down to write and will not move until “his human” is finished and types The End.

“Step into the darkness of Africa with me…
Don’t be afraid… after all, it is just my imagination…
or is it?”

A growl shatters the stillness around them, and into the moonlight walks a creature that only nightmares are made off, Veronica stiffens as she sees what has invaded the yard, she feels Pastor Steve jerk next to her, and from Peggy comes a gasp of utter disbelief, that carries across the space between them and the creature, Philip buries his head in his hands at the sight of it.

Blood Spoor in the Dark

The figure starts to claw at Lam’s face like a leopard, but rather than claws raking the body, Piet catches the glint of steel claws in the moonlight.  The killer had returned to complete the cult ritual of sacrifice.

Piet, clutching his .38 moves out from the cover of the forest and advances towards the Leopard Man.  All his anger at the atrocities that have been committed by these things against innocent people starts to boil over.

“Hey you sick fuck, I’ve got something here for you.”

The Leopard Man looks up at Piet, from his crouched position over Lam’s body, and snarls at Piet as if he were truly a big cat, then he springs towards Piet, his steel claws seeking the big man’s throat.

Piet side steps the man’s charge, and as the Leopard Man’s momentum carries him past Piet, Piet’s size 10 boots catches the man in the small of the back, sending him crashing to the ground.  Snarling and spitting like the leopard.

Piet looks down at the man, and places a heavy foot behind his neck, pinning him to the ground.

The Leopard Man squirms beneath the weight of Piet’s foot, and growls out a warning.

“You whites are fools, you cannot kill us for our magic is too strong, you do not realise our power.”

“It’s all mind over matter you sick fuck, I don’t mind, and you don’t matter.”

The report from the .38 in Piet’s hand echoes over the forest, and the face of the Leopard Man disintegrates from the force of the bullet.

The interior of the warehouse is gloomy, with only the lunar light from the moon breaking through the skylight windows and the scattering of black candles that burn at intervals along the path leading up towards the front of the building where a crude altar has been erected.

The frightened whimpers of a young boy carry across the silence as they wait for their master to arrive.  The parents of the child have bound his hands and feet, for has not great glory been bestowed upon them by his being chosen by the great master as the one to feel the power of the claws.  His innocent blood is to be spilt to enable the master to speak to the ones from the dark side.

Movement from the front of the warehouse brings silence down on all that are gathered, and then before them, held by a chain appears a lioness.  The chain is padlocked to a steel bolt in the floor and the handlers move off to join those already waiting.

The low growls from the big cat fill the area, and then she lies down to wait, for she has been here before, and knows that before tonight is over, she will feed.

A figure appears before the assembled crowd, and a murmur ripples through them.  The Lion Man now stands before them.

Amos, now naked except for the skin of a lion, draped over his body, the head of the beast placed over his head looks out at the people below him.  The steel claws attached to his hands glint in the light from the candles.

His voice reverberates across the silent warehouse.

“Who brings the chosen sacrifice; stand so that I may see you.”

The couple stands with their bound son between them.

“Bring the boy forward so that we may please the elders, and they will open the doorway to the underworld.”

The Devil in Eden.

The village is made up of thatch and mud huts.  Half naked children run around in the dirt playing, while chickens scatter in front of them.  The women busy themselves around the cooking fires, while the men folk sit under the great tree smoking, and drinking homemade beer.

On the horizon, the massive storm clouds gather, the wind whipping the corn fields into frenzy and sending up dust devils into the darkening sky.  The villagers hurry to the shelter of their huts, and huddle together to wait for the storm to pass.

The night is dark as the thunder rolls across the sky, flashes of lightning turn night to day and the heavy rain pelts down through the canopy of trees as the killer moves silently towards the village.

No-one will hear the screams tonight as the thunder drums out across the sky, and the killer moves steadily through the forest in the direction of the sleeping village.  He pauses as he breaks through the thick foliage that surrounds the village.

Slowly he surveys the area, his eye moves over the mud huts, he smells the wood fires that burn inside, and hears the sound of people sleeping as he steadily moves across the muddy open area towards a hut closest to the edge of the forest.

He pauses at the door to the hut, his sense of smell tells him that the people inside are sickly and weak.  He tries the door, but it is wedged shut firmly from the inside, so he moves around to the back of the hut, and standing, tests the mud walls.

He applies his weight, and the wall starts to crumble.  Terrified voices ring out from within, that the Devil is here, and the sound of their fear drives him on, and with a lunge the killer enters the dark interior of the hut.

If those teasers caught your attention, and you would like to sit back and enjoy a journey into the darkness, you can find them all on Amazon, Smashwords, Barnes & Noble, and other online retailers.